These monsters were inspired from my littlest guy who is obsessed with anything small and fury. He spends half his life pretending to be as he calls it a 'little creature', this little creature can be anything from an Ewok to a puppy dog to a baby yeti. The common theme it seems is it is small and fury and likes to make a snarf snarf noise lots!

Do your kids have imaginary friends or play at being different types of animals? I'm always fascinated with their own imaginary creatures and this project really sprung from trying to get them to describe their animal/monsters/friends to me. 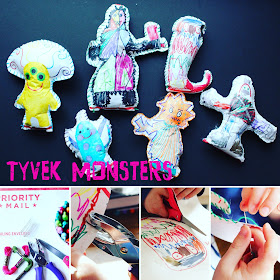 Tyvek material - In the US priority mail envelopes are made of this, outside the US you may have to purchase from FEDEx or other carriers.
Scissors
Sharpies
Needle and embroidery thread
Small hole punch (only needed to make threading easier for younger children)
Stuffing, we used the polyester stuffing sold for soft animals but to really recycle you could use shreadded paper or plastic grocery bags. 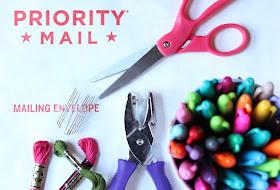 Have your child draw their monster onto the priority mail envelope using sharpies. I asked the children to ensure the monsters feet were at the bottom of the envelope on the red line. We did this because then when we came to cut them out for the next part we avoided cutting the bottom of the envelope and it kept the front and back of the together nicely making it easier when you come to the sewing stage. 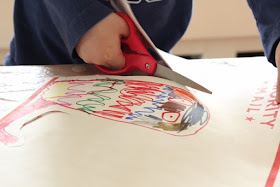 This step really is an optional step, if you are working with older kids they can probably be taught to sew directly through the paper layers as you would when sewing fabric. For the younger kids that were joining me I showed them how to use our smallest hole punch to make a line of tiny guide holes around the outside of the monsters. These guide holes really helped them when they came to sew make neat even stitches around the edge of the monster. 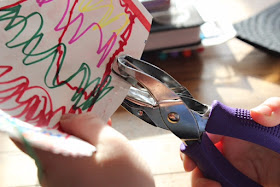 Once the holes were made we took the embroidery thread, knotted one end and beginning at the base slowly stitched around the monster. Occasionally checking to ensure the thread is not becoming tangled. The older kids needed little help the four year old's needed checking on more frequently to be untangled but most managed to sew their own monsters. 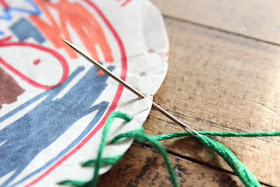 As you go around the head of the monster and start to close up the final side remember to leave a space in which to stuff the monster. Depending on the stuffing type you may need a bigger or smaller area to fill it. We used a chopstick to push the stuffing into the smaller arms and tails etc. 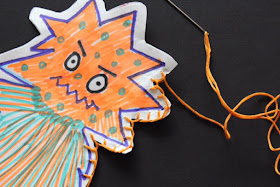 Once you have stuffed your little monster finish up your stitching. The kids all needed help with this part as the stuffing made it harder to match up the holes we had punched through. They also needed help tying the embroidery thread off at the end.

And there you have it, little creature... 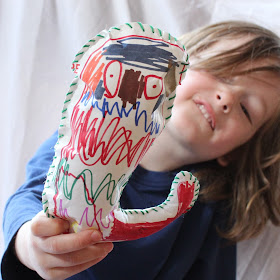 Here are some of the others, so cute and all so different what does your child's imaginary friend look like? 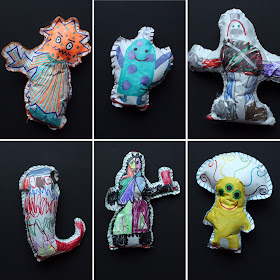